I really hate to break it to you but chalkboard paint is sort of a sham. Don’t get me wrong, I love the look and I don’t regret painting a chalkboard wall in my kitchen but it is only a “chalkboard” in the sense that IKEA furniture is “wood.” At least that is what I’ve been thinking since I painted it about six months ago (here).

Remember those green chalkboards from elementary school? I loved those. I especially liked it when my class job was to de-chalk the erasers which involved just going outside and banging them together so that the dust flew everywhere. There is no comparison between a real slate chalkboard and something painted with chalkboard paint, but I finally figured out a few tricks to make mine work better.

The problem I was having is that whenever I tried to erase a message it doesn’t really erase. See how you can still see my previous message underneath the current one? 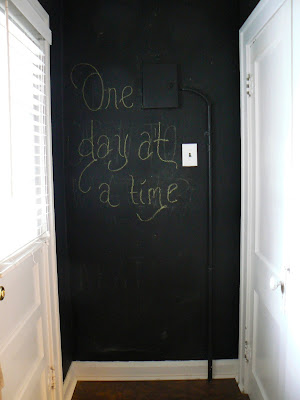 Here is what it looks like after I tried to erase (with a dry paper towel): 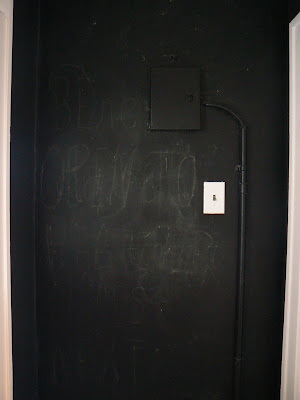 Yeah not great. Because I’ve had this problem I’ve only changed the message like three times in the six months since I painted it. Frustrated by this I decided to actually spend 15 minutes and figure out what I was doing wrong and amazingly I did figure it out.
Here is out to properly use a chalkboard painted wall:
Prime it with chalk. When you first paint the wall the directions tell you to ‘prime’ it which basically entails rubbing a piece of chalk all over the wall. It seemed weird and pointless but I did it. 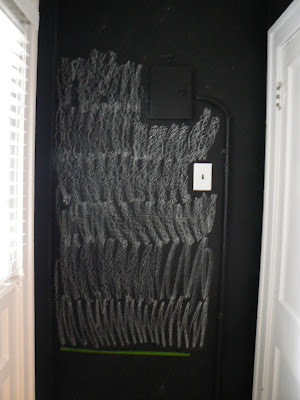 Side note: Chalk gets everywhere while doing this and I read somewhere that folding over a piece of painters tape will help catch some of the dust. It actually did help a little bit, but not a ton. 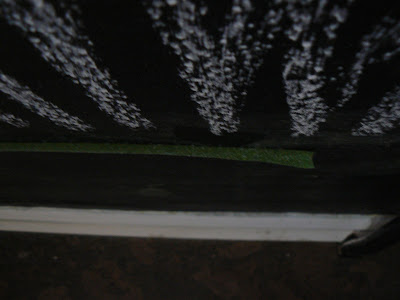 What I did originally was prime the wall with chalk and then I completely wiped it off. That seemed like a reasonable thing to do, but it is the wrong thing to do. Instead of wiping the chalk off completely you just sort of rub it around until it’s smoky looking. 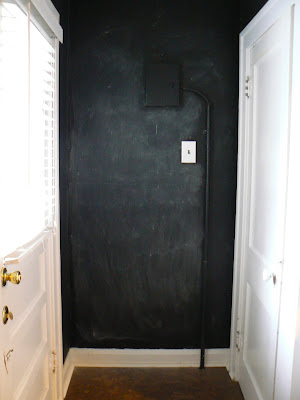 I also thought priming it was something you did once, but in order for it to work properly you should prime it whenever the wall looses this smoky look. If your wall looks smoky like this you can write and erase and write again and it works!
* So chalkboard paint actually does work… if you use it properly! Who knew? 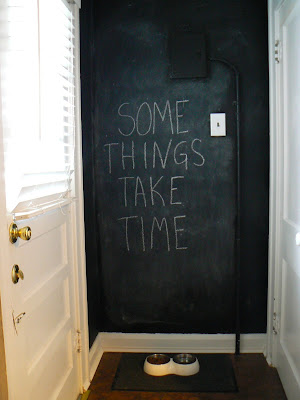 Here is a side by side showing what to do and what not to do: 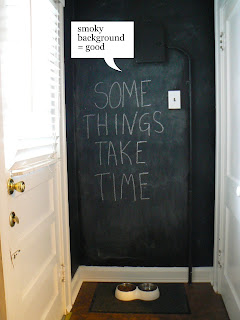 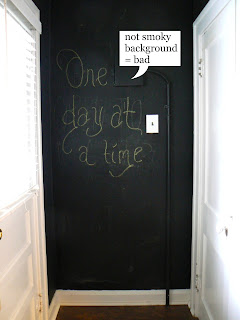 Also, if you ever do make yourself a chalkboard wall let me be the first to tell you that it is really hard to find chalk. I looked everywhere! I finally found colored chalk a few months ago, but I really wanted white so I kept looking. I finally found some last week so I was happy. I guess the best place would be to go to a teacher supply store or something but whose got time for that? I finally found some at Target which I’d looked at several times before but this time they actually had some in stock.
Also, I copy all my messages straight from the Pinterest ‘quotes’ category because I’m super original.
The end!