The good thing about being relatively crafty is that you can make gifts for people. Last week I showed you the DIY Stovetop Scent that I made as a hostess and neighbor gift. Today I’m going to show you the craft I was commissioned to make as a gift. My Mom loves pinterest but isn’t super crafty herself so when she showed me one of the things she loves but won’t make herself I knew it would be perfect gift. Here’s what I made: 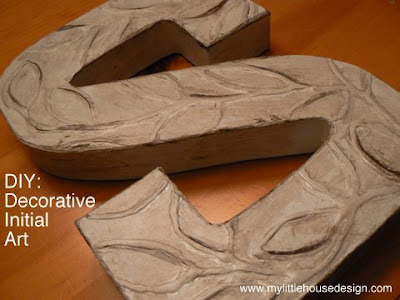 Yep, it’s a decorative initial. It isn’t something I would make for myself but it isn’t for me so it doesn’t really matter. This project cost me… wait for it… $3.99! (Don’t worry I bought her other stuff too.) This was a seriously fast and easy project (actual project time about 30 minutes plus 12 hours of drying time). Here is the process which I vaguely followed from here and here:
1) Gather materials:
Cardboard or paper mache letter. I had a hard time finding this but I finally found them at Joann Fabrics (link to the one I bought: here). This letter is 12″ tall. It was originally $4.49 but I got it for $3.99 on sale.
Tacky glue. I used Elmer’s Craft Bond Tacky Glue (here) because I had it on hand (I’ve honestly had that glue for about 5 years and it still works!).
Base paint and accent paint. If you go to the paint section of any hardware store there is usually a section of used or returned paints. I always look through there because you can find some gems for cheap. The base color I used here is Glidden’s Barely Jade which came from a test pot I got for $.50. The accent color I used (which I’ll explain more about in a moment) is brown acrylic paint from a little set of acrylics.
2) I started by drawing a design on my letter. The design I drew is similar to the tutorial I followed because that is what my Mom asked for. This took a minor amount of skill, but I was basically copying so not too bad. If you are nervous about free-handing a design you could always print a design, cut it out, and trace it. 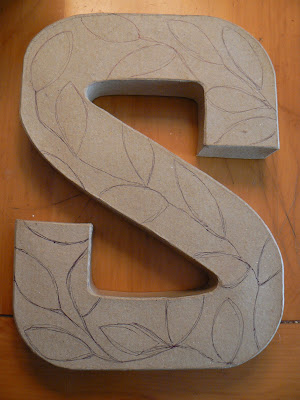 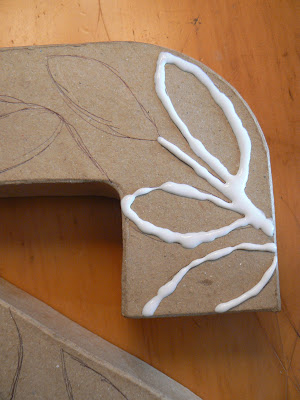 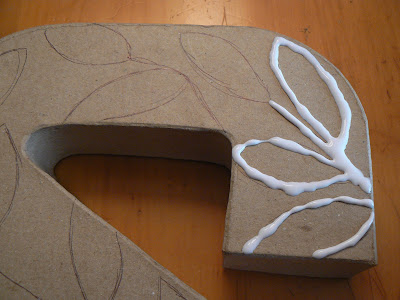 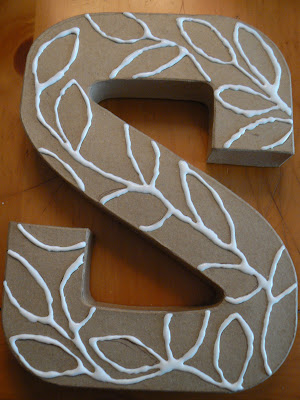 Apply the glue liberally. I went over my design once and then went over it again in parts that looked weak. Remember the point of all this is to get a three dimensional look so you don’t want it to be too thin or it won’t show up after the paint is on.

3) Let it dry completely. This is was the hardest part of this whole project for me because I am so impatient. When I start a project I like to complete it as soon as possible so waiting is just torture for me. But I managed to waited about 10 hours before the next step. 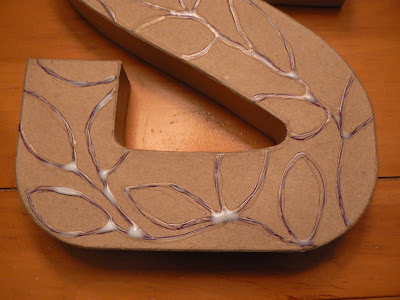 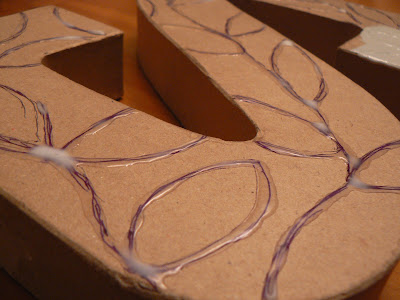 My glue dried clear which had me panic for a minute because I thought it all seeped into the paper mache, but thankfully it still felt 3D which is all the matters really.

4) Paint a base coat. As I mentioned earlier I used a test pot of Glidden’s Barely Jade which is an interior eggshell paint. If I were doing this project for myself I would have used semi-gloss spray paint for some shine, but since I was planning on distressing this one anyway interior paint worked great because it absorbed a little of the accent paint. You also need to let this paint dry (this craft is simple but there is a lot drying time). 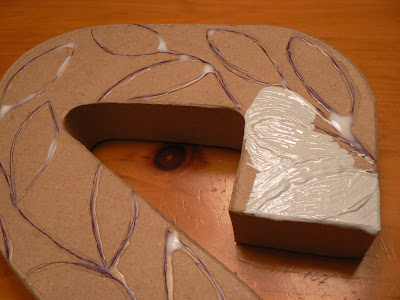 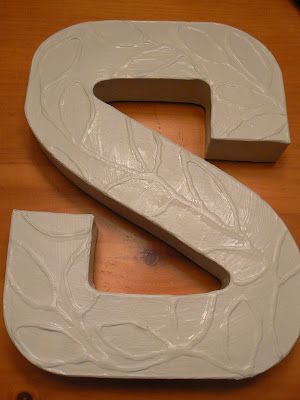 I personally like it all one color but again it isn’t for me so on to the next step.
5) Accent and distress the 3D design. I used a mixture of brown acrylic paint and a lot of water. I used an artist’s paint brush which I think helped a lot. 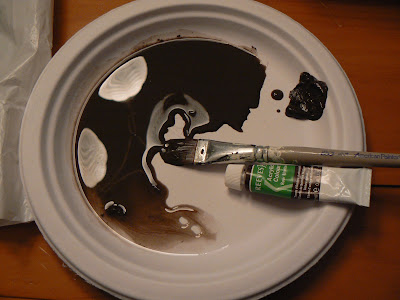 I got in the zone while doing this and forget to take any ‘in process’ pictures but I’ll try and explain what I did. 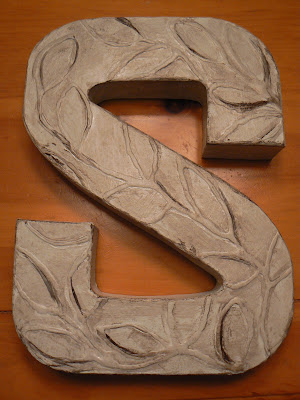 Since I was going for a distressed look I first dipped a paper towel in the tinted water shown above (about 3 parts water and 1 part brown paint) and then sort sponged the whole thing. I wiped and patted until it look sort of brownish all over. I’m not sure if that is how you distress stuff but it seems to have worked. I also did this to the sides because they looked silly without any distressing. 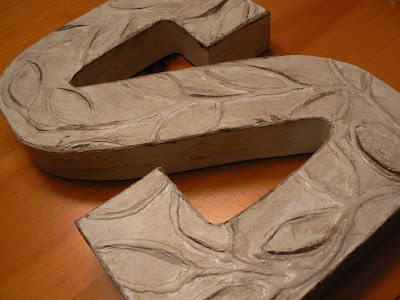 Next, I used my paint brush to outline the glue design. I didn’t outline every single place but instead did it every so often. In some places I used the watery paint for a more subtle look and in other places I used a more paint heavy mixture. A paper towel was in my hand at all times so that I could quickly wipe down any parts that got too dark or goopy. 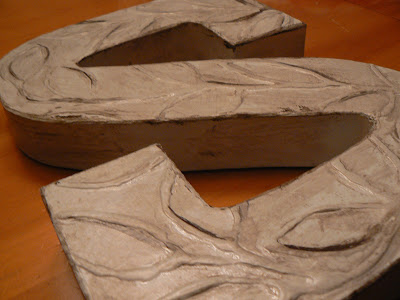 At the last minute I used the brush to wipe the edges of the letter to sort of accentuate the outline of the letter.
That’s it! It was a very simple and cheap project. The best part of course was being able to give my Mom something she wanted. Here is a picture I snapped of it on Christmas day. We just leaned it on a shelf for the time being, but I think she wants to incorporate it into a gallery wall at some point. 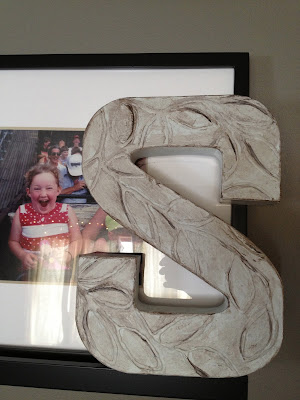 Did you make any gifts this year? I always feel a little cheap making stuff for people because they know it doesn’t cost much, but hopefully the amount of time and love you put into something counts.