Photographs of my Bathroom

This is my bathroom as of September 2013, enjoy!

Photographs of my Dining Room

This is my dining room as of September 2013, enjoy!

Photographs of my Bedroom

This is my bedroom as of September 2013, enjoy!

This is my kitchen as of September 2013, enjoy!

Like the parenthetical subtitle suggests, this is not much of a tutorial. I love blogs that go into crazy detail like YHL and Bower Power, but I am not like that. My posts tend to be on the long side, but being detailed is not a strong point for me. So this is a tutorial in the vaguest sense (now I know you’re super excited to read it). Also, I apologize in advance for the poor picture quality. We did this mostly at night and I am easily distracted so I didn’t remember to take pictures very often. If you want a good tutorial the ones we used are here, here, and here.

Steps to Install a Cork Floor:

The end. Haha just kidding. But no seriously I did hire someone because I had no intention of doing this project on my own. I really wish I was handy enough to do this sort of project but that is currently way beyond my skill set and my tool supply (my fanciest tool is a hand-me-down power drill). So I hired my awesome friend* who has helped me with so many other projects at this house (bathroom tile, medicine cabinet, fence repair, shelf hanging, etc.). Because I am interested in learning how to do this sort of stuff he let me hang around and help him. Turns out I was not helpful at all but it was nice that he let me try.

Since the linoleum in my kitchen was relatively intact we decided to just leave it down and install the new flooring on top of it. Our first step was to pull up the toe kick around the border of the room. 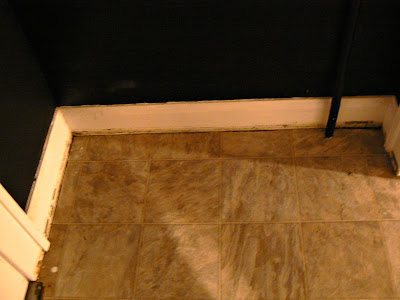 Like I said the linoleum was mostly intact but around the edge it was pulling up a little so we (I say ‘we’ but let’s be honest I had no idea what I was doing so it was mostly ‘he’) decided to used a blade to cut the part that was curling up off. 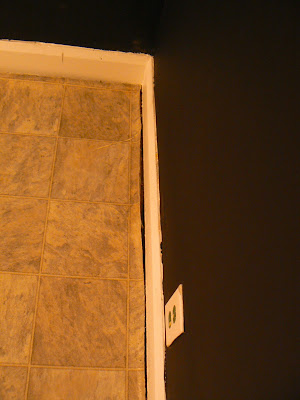 Despite the bad picture quality you can hopefully see how the linoleum is curling up around the edges in the picture above. He used a blade to trim the raised part off and since linoleum is so thin we were left with a fairly smooth transition. 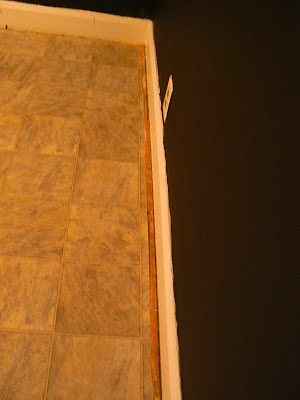 We also pulled up the thresholds to the basement and back door and the transition into the dining room. We also went around and checked for any missed nails (if we couldn’t get them out we hammered them down so the floor was smooth). After cleaning up the debris and sweeping we were on to the next step.
3) Underlayment.
The next step was pretty easy and I was still able to help at this point. Because the type of cork I chose is ‘floating’ meaning it isn’t glued or nailed down, the underlayment was very important. I did my research and found that the best one for this type of flooring is the Eco Silent Sound HD Underlayment (someone had a little too much fun naming this product). It was pretty straightforward to lay it down. 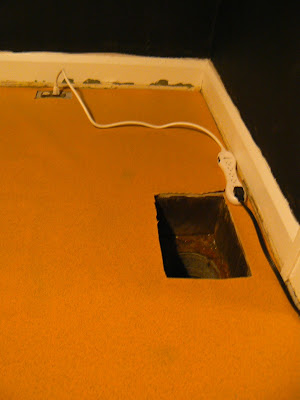 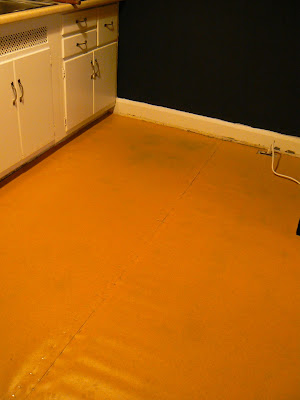 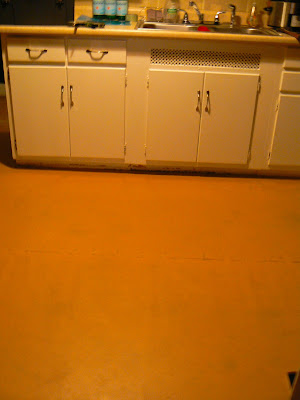 Like I said, not good pictures, but that is what the underlayment looked like after it was all put down. We used a combination of this double sided tape and a staple gun to attach it to the floor.
Side note: this is what my dining room looked like for a week… 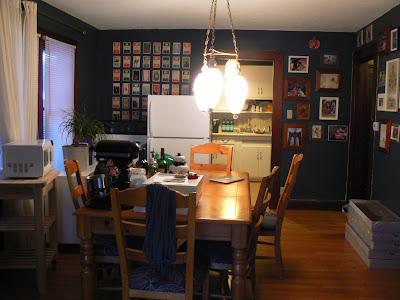 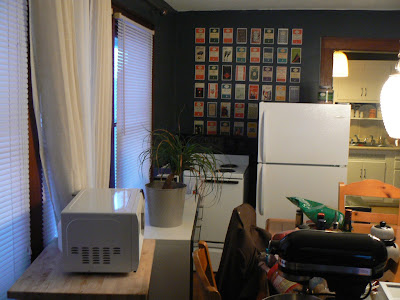 It actually wasn’t so bad because my dining room is abnormally big. I sort felt like I was in a ship’s kitchen which was cool because who hasn’t dreamed about living on a ship? I think I would like living on a ship if I didn’t get so crazy sea sick… ah well, in another life maybe.
4) Install Cork Flooring.
I chose Lisbon Cork in Rossio from Lumber Liquidators and after a quick look at the instructions we got right into it. 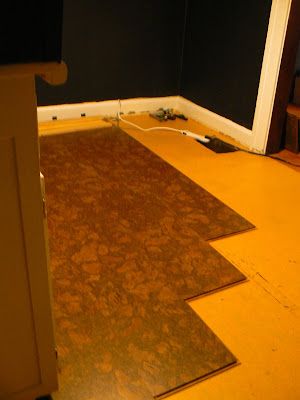 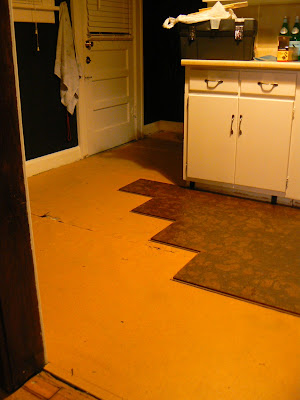 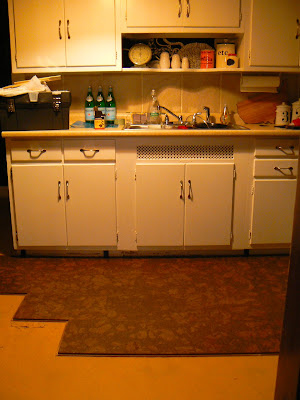 At this point I became extremely unhelpful. I was basically just leering in the corner offering very unhelpful advice. The main problem we ran into, which I did not take a picture of, is that the tongue and groove where the pieces connect was very fragile and one bad tap and the tongue would crack and then not lay properly. But we he figured it out after a few attempts. This flooring kit was really helpful as was this video.
5) Finishing touches.
I didn’t even attempt to help at this point because it involved a lot of measuring and sawing but if you want to know how to install a toe kick… uh, Google it.
Before the toe kick (that black thing is a spacer) 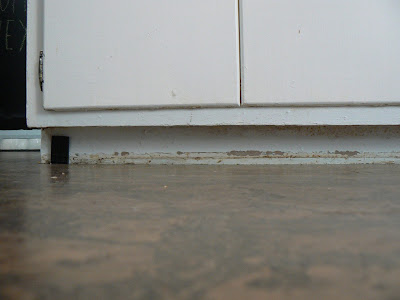 After the toe kick – it makes such a big difference! I didn’t even have to repaint which was very nice. 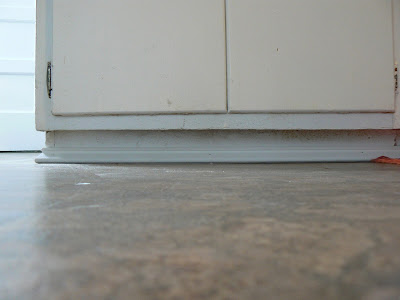 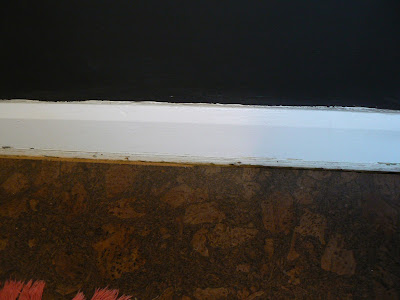 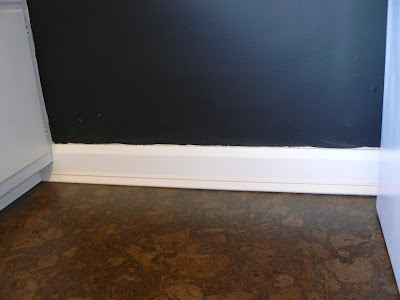 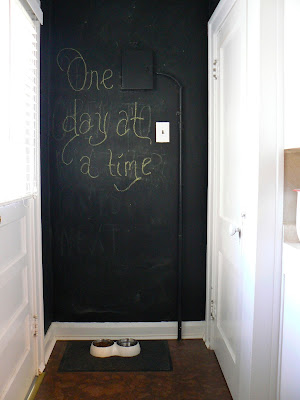 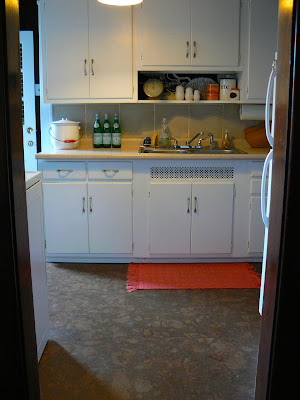 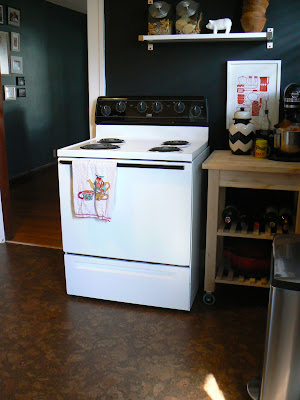 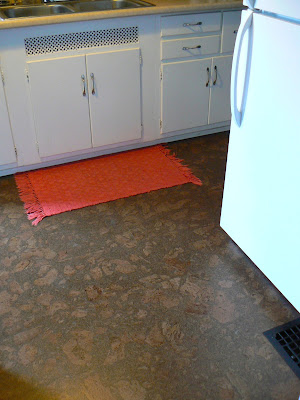 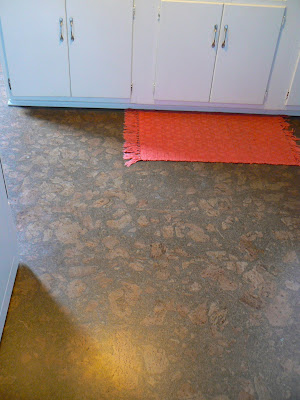 I guess I should have at least wiped up the floor before I took pictures, ignore the puppy paw prints… 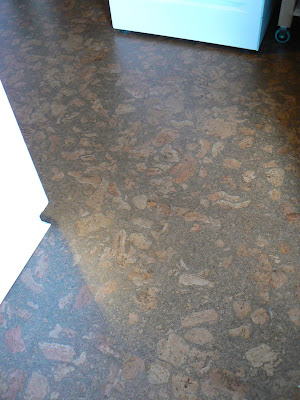 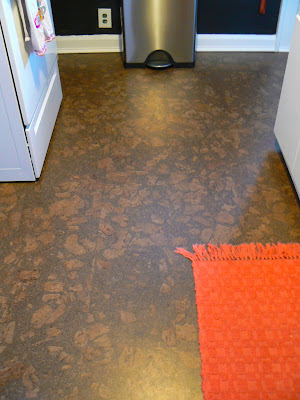 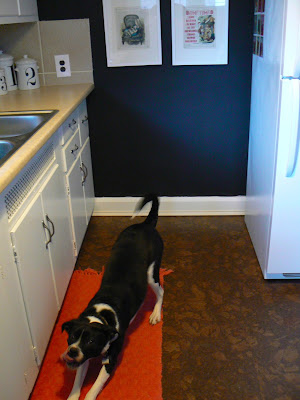 This floor is Bob approved.
Though I’ve only lived with this floor for about two weeks I am 100% happy with it. I highly recommend it! It feels great on my feet and it’s easy to wipe clean when necessary. I was initially nervous about getting water on it but I don’t really worry about that any more because it hasn’t been a problem. Mostly I’m just happy that the beautiful floor further distracts people from noticing the boring countertop and backsplash.
*It bears repeating… this project was managed and executed by Osborn & Stillman. Specializing in custom furniture, Osborn & Stillman also do built-ins, flooring, countertops, and pretty much anything “wood” you can imagine. Being that they are good friends of mine I heartily recommend that you contact them for any home projects you have in mind. They also did my bathroom tile and medicine cabinet which I’m still in love with. Seriously, check out their website, it’ll make you want to burn all of your IKEA furniture.

Yay, it’s finished! I am beyond happy with my latest project. I’ve hated the linoleum floors in the kitchen since I moved in, but they were in decent enough shape that I decided to spend my money elsewhere first. I waited 54 weeks to do this project. That is a very long time for an impatient person like me! But enough rambling, here are my new kitchen floors:

Ah, I’m so in love! The old floor was super nasty and it never looked clean (not that I ever mopped or anything). To replace it I chose Lisbon Cork in Rossio from Lumber Liquidators. I love it! I’ve been really intrigued by cork flooring for a long time. The first time I heard of it, I was like wha??? Cork? That’s strange! But after some research I was sold. My favorite feature is how the cork is harvested. Cork grows on trees and the top layer of bark comes off in a big piece. The tree stays alive and over a period of nine years it redevelops the layer that was peeled off, amazing uh? Seriously, Google cork trees. The images are insane. So the environmental aspect was really important part of my decision process, but I also happen to love the way it looks. Another bonus is that it really cuts down on sound pollution (it would be perfect for a house with a finished basement). The only things that sort of worries me is getting it too wet, but I’ve read tons of reviews, commentaries, and blog posts about how to clean it plus it came pre-sealed so I shouldn’t worry.

There are still a few finishing touches left to do (toe kick and thresholds) but I couldn’t wait any longer to share ‘Before’ and ‘After’ pictures. I’ll be back later this week with a little more detail on the how the floors were installed (I kind of helped!) plus more pictures naturally.

*This project was managed and executed by Osborn & Stillman. Specializing in custom furniture, Osborn & Stillman also do built-ins, flooring, countertops, and pretty much anything “wood” you can imagine. Being that they are good friends of mine I heartily recommend that you contact them for any home projects you have in mind. They also did my bathroom tile and medicine cabinet which I’m still in love with. Seriously, check out their website, it’ll make you want to burn all of your IKEA furniture.